You are at:Home»News»International News»Webuild Part of Team Chosen to Build Sorta Project in Norway 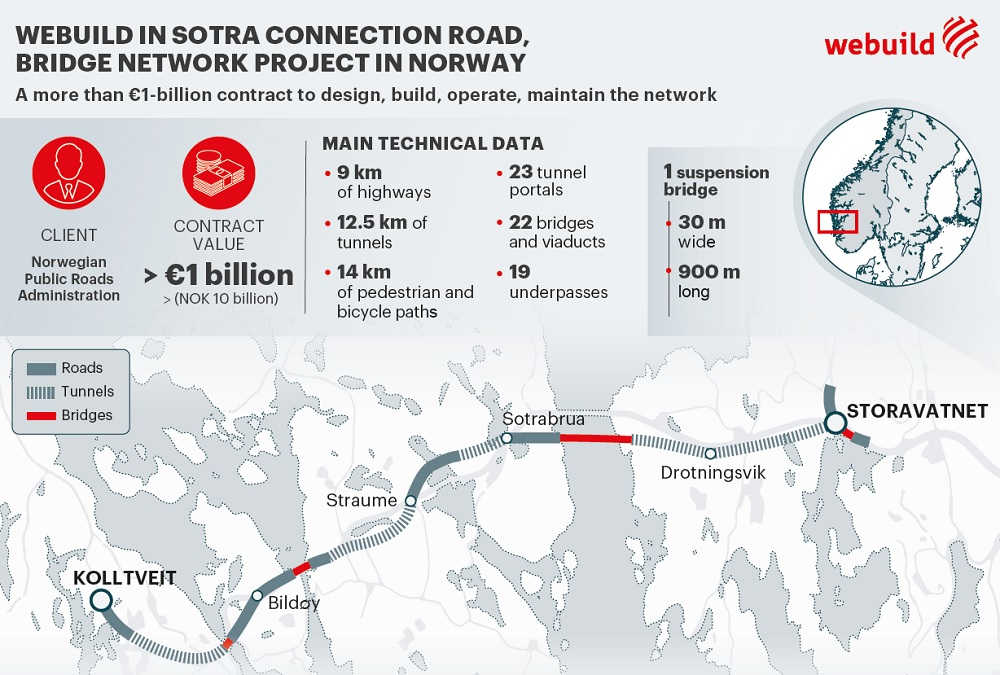 Webuild, part of the Sotra Link consortium, has won a contract worth more than €1 billion to build and manage the RV.555 Sotra Connection PPP Project, a network of roads, tunnels, bridges and viaducts in the western Norwegian county of Vestland.

Webuild has a 35% stake in the Sotra Link construction consortium that will be responsible for the design and construction of the project, and a 10% stake in the special purpose vehicle that will operate and maintain the network. The financial closing is expected in the first quarter of 2022.

The contract will bring to €10.6 billion the total value of new orders that Webuild has acquired, is in the process of finalizing, or for which it has become the preferred bidder so far this year, in addition to the €13 billion contract to build the first high-speed railway in Texas.

Commissioned by the Norwegian Public Roads Administration (NPRA), the project is one of Norway’s major projects, as well as one of the biggest to be done under a public-private partnership as the country invests in improving its infrastructure. It includes the design, construction, financing and management under concession a road network that includes 9 km of highway and a suspension bridge between Øygarden and Bergen. The bridge will be 30 m wide and 900 m long and towers 114 m high. The project also includes a total of 12.5 km of tunnels, 19 road and pedestrian underpasses, 23 tunnel portals, 22 bridges and viaducts and 14 km of pedestrian and bicycle path.

“Norway is a strategic market for Webuild,” said Pietro Salini, Chief Executive of Webuild. “We have been in Norway for more than 15 years and we have been able to see that the values that make up our Group’s DNA – such as innovation, sustainability and inclusion – are founding values for the country that hosts us. This sharing of values, in addition to the Norwegian government’s push to invest in infrastructure and digitalization, has us view Norway as an ideal partner, a partner we want to work with and a country where we want to invest for the long term. We want to put our expertise at the service of the country with a project like Rv555, which we are convinced will be an opportunity for us to grow along with the entire supply chain with which we will work on the project.”

Webuild is a global leader in the infrastructure sector with a presence in 50 countries and a track record that includes the construction of more than 80,000 km of roads and highways, the excavation of more than 2,000 km of tunnels and the construction of bridges for a combined length of nearly 1,000 km. The Group has built approximately 300 road and railway projects with bridges and viaducts, including the Genova San Giorgio Bridge in Genoa, an iconic structure that posed as an engineering challenge to be completed in a little more than a year. The Group also delivered the bridge and viaduct for Sydney Metro Northwest in Australia and the third bridge over the Bosphorus in Turkey. In Norway, Webuild is working on an upgrade of a 13.6-km section of a rail line between the towns of Nykirke and Barkaker south of Oslo.