You are at:Home»News»Westerly Storage Tunnel TBM Arrives from China 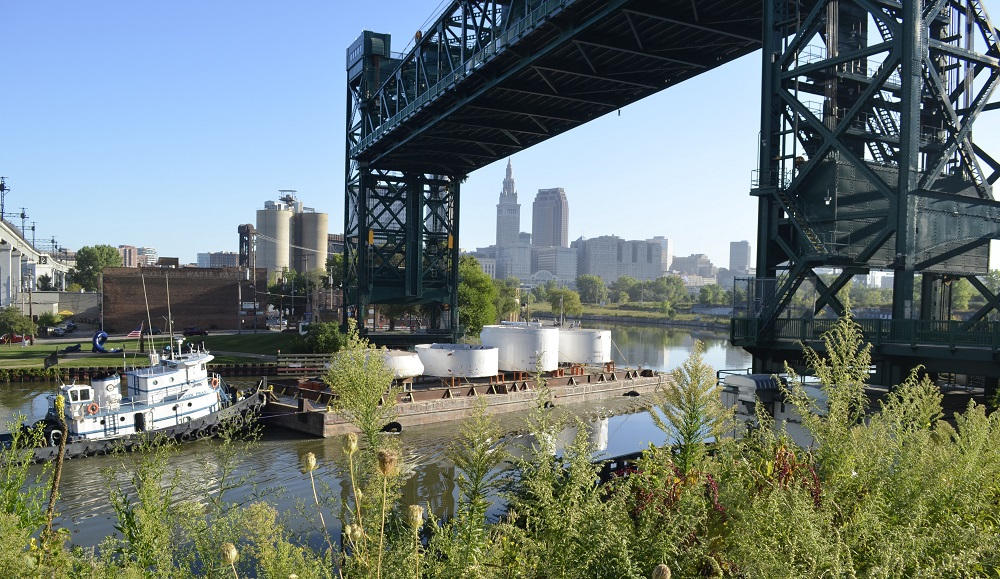 The Lovsuns TBM being floated up the Cuyahoga River (Photo: NEORSD).

The Lovsuns TBM that will bore the Westerly Storage Tunnel in Cleveland, Ohio, arrived by boat the week of Sept. 2. The freighter BBC Plata arrived at the Port of Cleveland where the TBM was offloaded onto a barge and pushed up the Cuyahoga River to a location near the jobsite. The ship sailed from Dalian, China, containing the pieces of the disassembled TBM, which included a 29-ft wide cutterhead and three large shields.

Besides the barge, an additional 40 truckloads of equipment will be hauled to the same location to begin the TBM’s underground reassembly where it will become 265-ft long and 2 million lbs.

The $135 million Westerly Storage Tunnel will be more than two miles long and 27 ft in diameter when finished in 2020. It will be Part of the Northeast Ohio Regional Sewer District‘s (NEORSD) Project Clean Lake program, the new tunnel will be capable of storing more than 300 million gallons of sewage and stormwater for treatment in a single year, thereby preventing combined sewer overflows from polluting Lake Erie.

The BBC Plata navigated from Dalian, China to Cleveland, Ohio, with several stops along the way. The time it will take to reassemble the TBM before its new underground journey begins is about the same. Eight weeks.