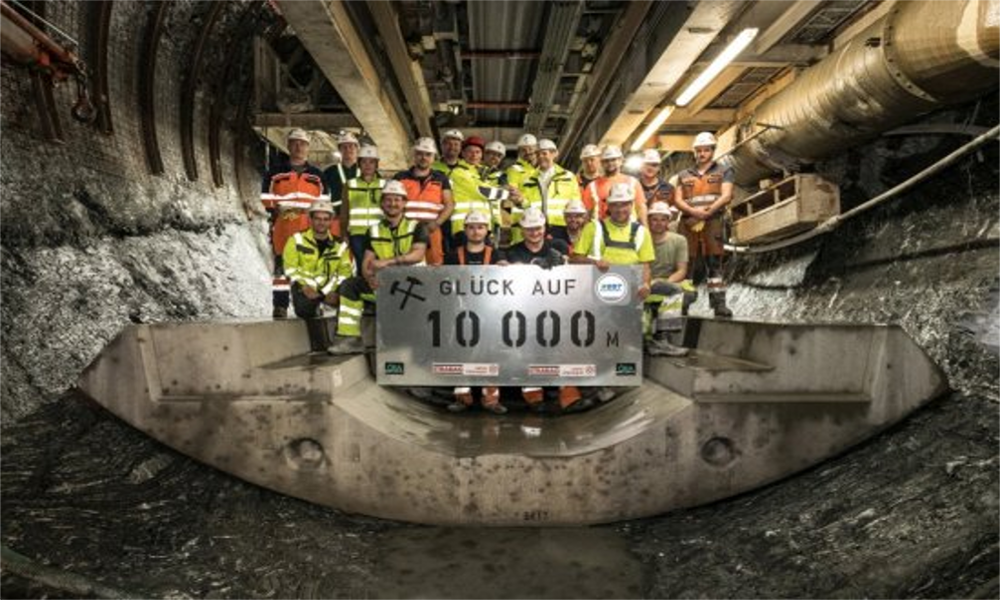 When the trains start running underneath the mountains between Italy and Austria, the 64-km long Brenner Base Tunnel will be the longest underground railway connection in the world. But even before it is finished, the tunnel is already setting records.

In late March, after two-and-a-half years of work, project company BBT SE and the STRABAG/Salini-Impregilo consortium in charge of the Tulfes-Pfons construction lot are celebrating having reached the 10,000-m mark in the Ahrental exploratory tunnel.

And that’s not the only record that has been set. With a rate of advance of 61.04 m in 24 hours in May 2017, the tunnel clearly surpassed the previous records held by the two Swiss rail tunnels Lötschberg Base Tunnel (52 m) and Gotthard Base Tunnel (56 m).

“We are very proud of having reached the 10,000-metre mark,” said STRABAG SE CEO Thomas Birtel. “Two-thirds of the contractual tunnel length have now been bored successfully under difficult conditions without any serious occupational accidents during TBM operation. Congratulations on this untiring effort.”

Since September 2015, the tunnel boring machine (TBM) has been chewing its way through the rock to excavate the exploratory section south of Innsbruck between Ahrental and Pfons. Now it’s just another 5,000 m to Pfons, which the TBM should reach in the spring of 2019.

The most important part of this high-tech underground logistics factory is the cutterhead. The cutterhead, with a diameter of nearly 8 m, is equipped with 42 disc cutters and six buckets to take up the excavated material. The chisels break up the rock into smaller pieces and the buckets carry the rubble to the area behind the cutterhead. The debris is then automatically transported across a set of conveyor belts out of the tunnel and to the disposal site.

Another first at the Brenner Base Tunnel is the use of a multi-service vehicle (MSV), an innovative, self-driving supply train on wheels that is making its global debut at Ahrental. The task of the MSV is to bring the construction material to the tunnel boring machine.

Construction on the 64-km Brenner Base Tunnel is proceeding at several construction sites and access tunnels at once – on both the Austrian and Italian sides. As of the end of March 2018, the workers had excavated more than 80 km, or about one third, of the total of 230 km of tunnel to be built.

So far about 23 km of the main tunnel, nearly half of the 30 km exploratory tunnel and about 28 km of access, rescue and logistics tunnels have been completed.