You are at:Home»News»CBE Celebrates 20 Years in USA 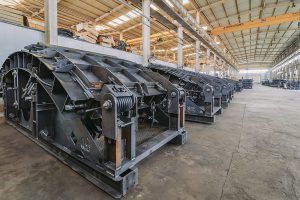 CBE Group was awarded two contracts in the United States by its client Traylor Precast LLC, with whom the company already worked in the past, especially for the Bay Tunnel project in 2010 and the Westside 1 project in 2015. Today, Silicon Valley Clean Water and Westside 2 are in the launch phase.

CBE Group has a long history in the United States. It all started 20 years ago,  in 1999, when the French company was awarded a contract for a carousel and molds on the Detroit River Outfall project, in Detroit. CBE Group and Traylor Precast met for the first time. Since then, no less than 30 projects have been achieved by CBE on American territory for Traylor or other clients, among which the MTA Los Angeles project in 2004, the San Francisco Bay Tunnel project in 2010, the Alaskan Way project in 2012, and the Westside 1 project in 2015. Today, Silicon Valley Clean Water and Westside 2 are in the launch phase.

The challenge of this project is to build a sewage tunnel adapted to the growing population in the San Francisco Bay. The client ordered 8 mold rings from CBE Group, each composed of 6 concrete segments. In order to improve productivity, Traylor Precast wanted a carousel: it was also agreed that CBE Group would revise and modify the existing one from the Bay Tunnel project, in order to adapt it to Silicon Valley Clean Water. Six months after the beginning of the project, designs and purchases are complete, half of the molds have been produced and sent onsite, after a control visit from the client in the production workshop of CBE Group in France.

LA Metro Westside 2
After working on the Westside 1 project in 2015, CBE Group comes back to Los Angeles for the extension of an existing underground line. This time, the company provides 2 mold rings, intended for the already existing carousel. As for the Silicon Valley Clean Water project, a maintenance and an update of the automatism have been achieved by CBE Group for the final commissioning of the adapted plant.

Nicolas Dufour, in charge of the project for CBE Group, stated: “The specificity of this project is that the Design Office and the client worked together on a technical solution to face the environmental conditions. Indeed, this part of the subway of Los Angeles crosses the San Andreas Fault, hence the use of special reinforcement for concrete segments.”

Westside 2 represents a challenge for CBE Group, one that the company is happy to take while celebrating its 20-year anniversary of collaboration with the United States and its client Traylor Precast.