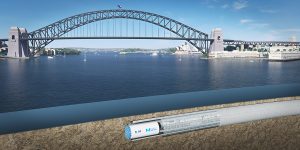 CIMIC Group company CPB Contractors, with its joint venture partners, has been selected to deliver a new metro railway crossing deep under the world-famous Sydney Harbor.

CIMIC Group Chief Executive Officer Adolfo Valderas said: “CIMIC and CPB Contractors have been delivering major underground infrastructure in Australia for more than a decade, and have brought together a joint venture team of experience, strength and agility to ensure an innovative and effective works program.

“It is our privilege to be working with Transport for NSW and the NSW Government to deliver this world-class and next-generation infrastructure initiative, which will be of lasting value for the people and communities of Sydney.”

CPB Contractors Managing Director Román Garrido said: “Our team is focused on ensuring that all objectives for this significant major project are achieved, including sustainable design and construction methodologies, opportunities for local workers and businesses, and a socially-inclusive procurement strategy.”

Tunnel and station excavation works are expected to start in coming weeks with the contract to conclude in mid-2021.

The joint venture was awarded the $1.15 billion contract in June 2013 to build the 15-km twin tunnels between Bella Vista and Epping (at the time, Australia’s longest railway tunnels), as well as the civil works for five new stations and two services facilities.