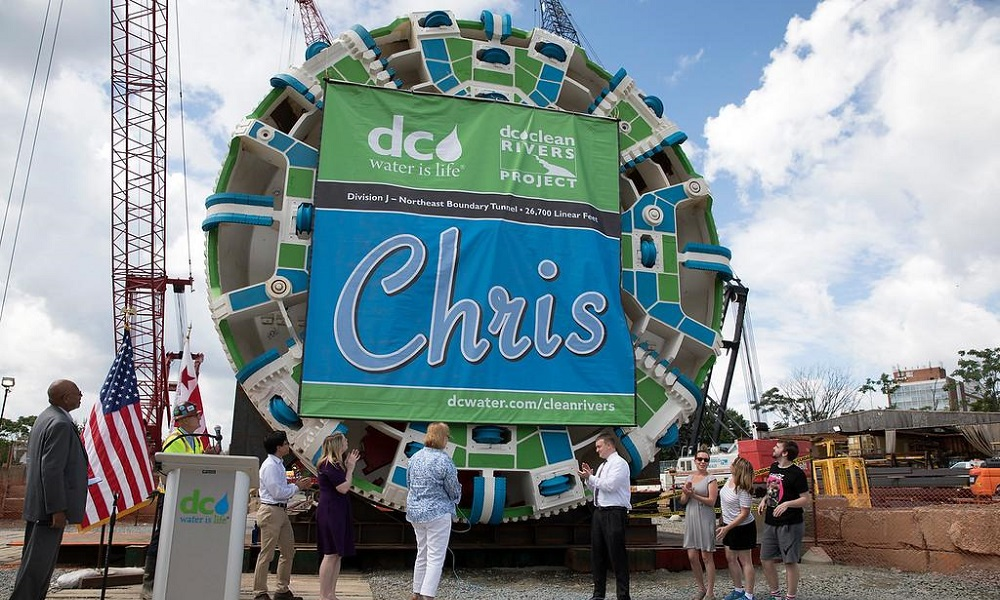 On June 28, the District of Columbia Water and Sewer Authority (DC Water) named and blessed the tunnel boring machine that will mine the final segment to complete the Anacostia River Tunnel System. This will make a much healthier Anacostia River by reducing combined sewer overflows (CSOs) by 98 percent and significantly reducing flooding in northeast DC.

The five-mile Northeast Boundary Tunnel is the largest and final segment of the massive tunnel system that will bring relief from CSOs that discharge to the Anacostia River. This work is part of the larger Clean Rivers Project, a $2.7 billion program to improve the water quality of the Anacostia and Potomac rivers and Rock Creek. The tunnel portions of the program increase the capacity of the combined sewer system by capturing combined sewage during rain storms and storing and conveying sewage to the Blue Plains Advanced Wastewater Treatment Plant for treatment. The tunnel will also significantly reduce flooding events in neighborhoods located in northeast D.C. including Mt. Olivet, Rhode Island Ave, LeDroit Park and Bloomingdale.

Like ships, TBMs are traditionally named for women. DC Water broke tradition by naming this tunnel boring machine for Christopher Allen, the Assistant Director for the Clean Rivers Project who passed away last year. Allen had 47 years of experience in construction management, general contracting, consulting field supervision and program management of large buildings, mass transit, heavy construction projects and aviation programs. He managed projects at major international airports, the Pentagon and other large capital improvement projects. Then he brought this wealth of knowledge, and valuable lessons learned, to the Clean Rivers Project.

DC Water Board Chair Tommy Wells said, “Today we celebrate the start of the final piece in a long-awaited solution to improve the health of the Anacostia River. This project will have a significant positive impact on the environment, helping to restore native aquatic wildlife, while bringing recreation back to the District’s waterways.”

Added DC Water CEO and General Manager David Gadis, “Our ratepayers have made a huge investment in the future of the Anacostia and life along the waterway. We celebrate today with the local communities who will benefit from healthier waterways and for those who have experienced flooding in northeast D.C. that the complete tunnel system will significantly reduce. We also celebrate the life of Christopher Allen, a man whose influence will long live on in the projects to which he has contributed his talents, and to the people to whom he has given great inspiration.”

National Park Service Superintendent Tara Morrison said, “The Anacostia River has a rich and diverse history told from many perspectives throughout time. Moments like today remind us that we are a part of that and we have a critical role in shaping the future of this river for the enjoyment of all.”

In March 2018, DC Water placed in service the southern portion of the tunnel and it was immediately put to the test with heavy rainstorms. In the first two and half months of operation, the tunnel captured and treated over 1.4 Billion gallons of sewage and over 100 tons of trash that would have normally gone into the Anacostia Rivers during these rains events.

The construction of this entire Anacostia River tunnel began in 2013. When complete in 2023, it will be 13.1 miles long and have a 23-ft inside diameter. The complete tunnel system will capture 98 percent of sewage overflows to the Anacostia River. It will also provide more flooding relief for residents in the neighborhoods along Mount Olivet Avenue and Rhode Island Avenue, including Bloomingdale and LeDroit Park neighborhoods, who for decades were served by undersized sewers.

As in many older cities, about one-third of the District has a combined sewer system. A combined sewer overflow (or CSO) occurs during heavy rain when the mixture of sewage and stormwater cannot fit in the sewer pipes and overflows to the nearest water body. CSOs contain bacteria and trash that can be harmful to the environment, but the system was designed as a preferable alternative to the combined sewage backing up in homes and businesses and on the streets. Since the early 1900s, only sewer systems with separate pipes for sewage and stormwater have been installed in the District. CSO tunnels similar to DC Water’s already exist in Chicago, Indianapolis, Atlanta and other cities.

For an online press kit of the event and background on Christopher Allen, please click here.