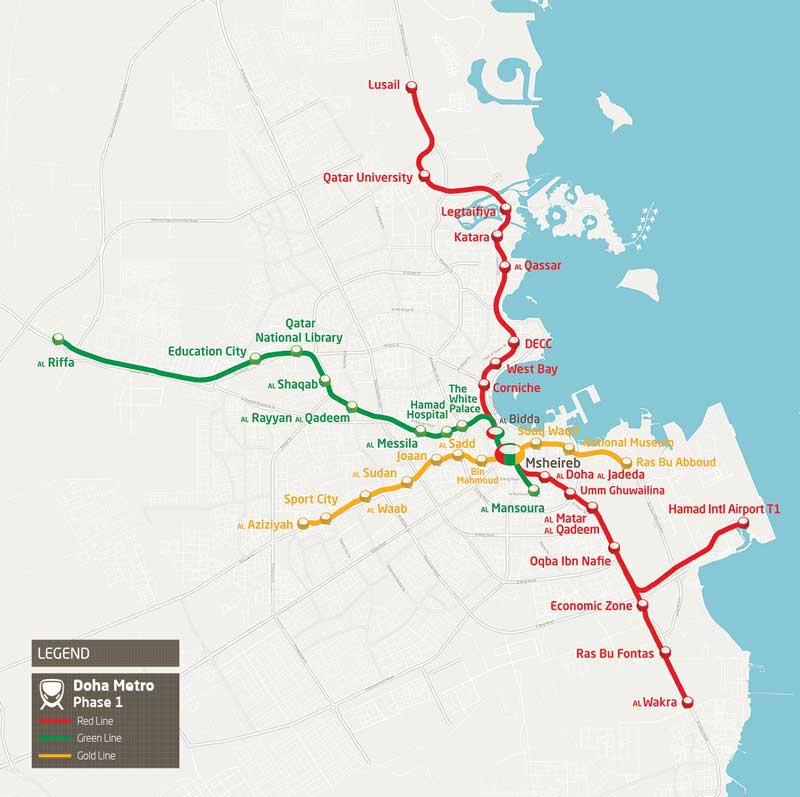 A remarkable addition to the city’s public transport infrastructure, the first part of Doha Metro’s Red Line, started its service for the public on May 8 running from Al Qassar in the North to Al Wakra in the South. Doha Metro consists of four lines serving the Greater Doha area and includes underground and elevated rail sections, bridges and passes. The metro network connects town centers, commercial hubs and residential areas throughout the city and is considered one of the world’s most modern metro and railway systems.

Urbanization and the demands of modern society are posing significant challenges for infrastructure in cities across the globe. More than half of the global population live in cities and towns and by 2025, 37 cities alone will house 10 percent of the world’s population, equaling around 800,000 million people. We need smart transport solutions as a part of the urban development. For over half a century, COWI has been involved in some of the world’s most prestigious and challenging underground infrastructure projects – Doha Metro being no exception.

The new line is part of the Qatar Rail Development Program, set up to help the country’s transport authorities in improving the existing public transport infrastructure and reducing urban congestion by 2030. The first part of the new line, also known as Red Line North, has a total length of 13 km. As lead for the design joint venture in a design-build contract, COWI carried out the detailed design for six underground stations, three switch boxes, 11 km of twin bored tunnels, 20 cross passages and a ramp to the elevated section.

The detailed design included all temporary works, permanent structural works, mechanical/electrical/plumbing (MEP) and architecture. In addition to the different design works, COWI was also responsible for the services regarding geological and hydrogeological conditions, materials durability assessment, fire and safety strategies, the sustainability assessment and the temporary traffic management.

The design and construction of the works required a multidisciplinary approach for the delivery of the six underground metro stations – Al Bidda, Corniche, QIC West Bay, DECC, Al Qassar and Katara – to facilitate the speedy execution. This included minimizing the required excavation support, followed by detailed and elaborated structural engineering of all bottom up stations and emergency shafts. In addition, came the MEP systems in standard stations and the largest combined station and cross-over box at Al Bidda – no less than 322 m long and 55 m wide.

Station design was done using 3D structural models, while drawing production for interfacing and planning purposes were done utilizing 3D BIM models and elements of 4D and 5D design process. The tunneling part of project consisted of 11 km of twin-bored tunnels with a 6.17-m internal diameter followed by the construction of the mined cross passages and audits. These tunnels and cross passages were constructed in very challenging ground conditions with water bearing layers and karst features.

Read about the Red Line online at the COWI website.