You are at:Home»News»International News»Finalists Announced for ITA ‘Innovative Use of Underground Space’ Award

Since 2015, the international competition “the ITA Tunnelling Awards” seeks and rewards the most ground-breaking innovation and outstanding projects in tunnelling and underground space utilization.

The 2018 edition will take place on Nov. 7 in Chuzhou-Nanjing during the 20th Chinese Tunnel and Underground works Conference (CTUC – from Nov 5-6). This will be followed by technical visits on Nov. 8 in Nanjing, Chuzhou and Shanghai.

In 2018, the three finalists for the award of “Innovative Use of Underground Space” all have one common trend: they build bridges. Bridges from the past to the present, bridges between urban activities and nature, bridges between the underground and the surface.

The Innovative Use of Underground Space category highlights the most unexpected and accomplished projects constructed underground. These projects aim to develop both ecological aspects as well as efficient urban planning, by shrinking the gap between the surface and the underground: creating new pedestrian connections, developing new utilizations of subterranean spaces and transferring surface functions to the ground. 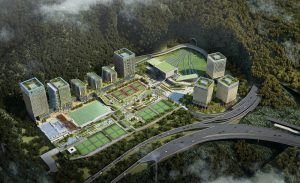 1. ECOLOGICAL CIVILIZATION CONSTRUCTION AND INTENSIVE LAND USE OF METRO PROJECT:
With the rapid development of tertiary industry in China since the 1980s, the roles of cities have gradually been transformed into distribution and service centers. But land is a non-renewable and extensive use of urban space, leading to unequal repartition of services and functions.

Intensive land use, on the contrary, is based on the selection of modes appropriate to their different intrinsic attributes. Intensive use of land generally follows three trends: Land Construction, Buildings and Traffic.

Located in Tanglangshan Park Shenyun, the project in an abandoned quarry includes  a “Shenyun Vehicle Section” which is at the north of Longwan Road in Nanshan District, and at the east side of Nanping Express Highway. The site is approximately 307 m wide and 905 m long, with floor space of 31.85 ha and overall floorage of 168,000.

Based on the purpose of intensive land use, Shenyun Vehicle Section combines and considers both ecological construction and business development requirements. The vehicle section mixes rail traffic, sports facilities, public facilities and a scientific research and education base. Natural and urban space are equally integrated within the project. This site is a wonderful reflection of the harmonious co-existence between human activities and nature, creating an ecological connection between hills and contributing to the natural balance of the area. 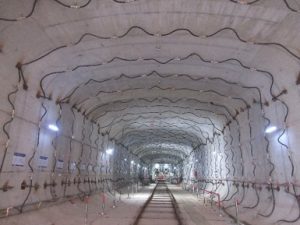 The project consists of the construction of an underground pedestrian walkway in Tianjin, in New Badalei area. It aims to connect the north and south concourses of the Heiniucheng Road freeway and the Neijiang North Road.

Heiniucheng Road is one of the most important roads in Tianjin with a width of 66.5 m. It is the first time the super-large cross-section rectangular pipe-jacking tunneling method was used in the watery and weak strata in Tianjin.

3. THE NORWEGIAN ROCK BLASTING MUSEUM : THE ONLY UNDERGROUND MUSEUM IN THE WORLD 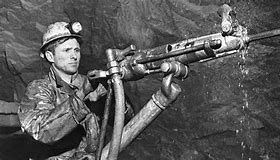 The Norwegian Rock Blasting Museum is an underground museum located near the Olympic City of Lillehammer in Norway.

The museum was created 25 years ago by the main stakeholders of the industry, to recognize Norway’s close and extensive history with tunnels.

The Norwegian Rock Blasting Museum is an entertaining and informative journey through the history of Norwegian tunneling and rock blasting, with a 240-m long semi-circular tunnel as the main attraction. The tunnel display equipment and tunneling techniques date from the beginnings of tunneling all the way to modern computerized drilling and TBM boring. This is a unique museum, and possibly the only purpose-built “tunneling museum” in the world.