You are at:Home»News»Retired Chairman and CEO Stephen D. Bechtel Jr. Dies at 95 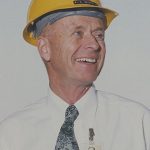 During his leadership years from 1960 to 1990, Steve Bechtel Jr. traveled frequently to the company’s far-flung projects.

Stephen D. Bechtel Jr., who led Bechtel Corp. from 1960 to 1990, died peacefully at home in San Francisco March 15. The patriarch of the Bechtel family and third-generation CEO, Stephen D. Bechtel Jr. (known as Steve Jr.) was a global figure in business, public affairs, and philanthropy. He oversaw the company’s growth into a world leader in the construction industry, building iconic infrastructure on six continents and pioneering new technologies and engineering and construction methods. The firm’s sales grew 11-fold, its employee population five-fold, and major projects from 18 to 119 during his tenure.

“My grandfather leaves behind a remarkable legacy of accomplishment, integrity, excellence, and commitment to customers and communities,” said Bechtel CEO and Chairman Brendan P. Bechtel. “In every aspect of his life, he was driven by his strong values and a vision for helping to build a better world, which continue to guide us in partnering with customers today.”

Stephen Bechtel Jr. was born on May 10, 1925, in Oakland, California. Upon graduation from Piedmont High School, he enlisted in the U.S. Marine Corps, took officer training at the University of Colorado, and earned a civil engineering degree from Purdue. In 1946, he entered Stanford University, where he received an MBA. From 1948-1960, he worked his way up the Bechtel ladder from field engineer to CEO at age 35.

Although Bechtel had a proud history of megaprojects in the United States, Steve Jr. extended the firm’s footprint around the world and took on efforts of increasing technical sophistication. Among Bechtel’s notable projects under his leadership were: the Bay Area Rapid Transit system (BART) of San Francisco; many first-of-a-kind North Sea oil and gas platforms; LNG plants in Algeria, the UAE, and Indonesia; nuclear power plants throughout the U.S.; the Jubail Industrial City and King Khalid International Airport in Saudi Arabia; and the Channel Tunnel between Britain and France.

Beyond Bechtel, Steve Jr. served as a director of leading companies including General Motors, IBM, and the Southern Pacific Railroad. He also served as chairman of both The Conference Board Inc. and the Business Council.

Steve Jr. was elected to the National Academy of Engineering in 1975 and served as chairman from 1982 to 1986.  He was the 1980 recipient of the Hoover Medal, which honors the civic and humanitarian achievements of engineers. He was elected a Fellow of the American Academy of Arts & Sciences in 1990 and the French Legion of Honor in 1979.

Active in civic affairs, he served on six presidential commissions for three U.S. presidents. In 1991, President George H.W. Bush awarded Steve Jr. the nation’s highest honor for technological achievement, the National Medal of Technology and Innovation.  He also served in advisory roles at the California Institute of Technology, Purdue, MIT, Stanford, and the Hoover Institution.