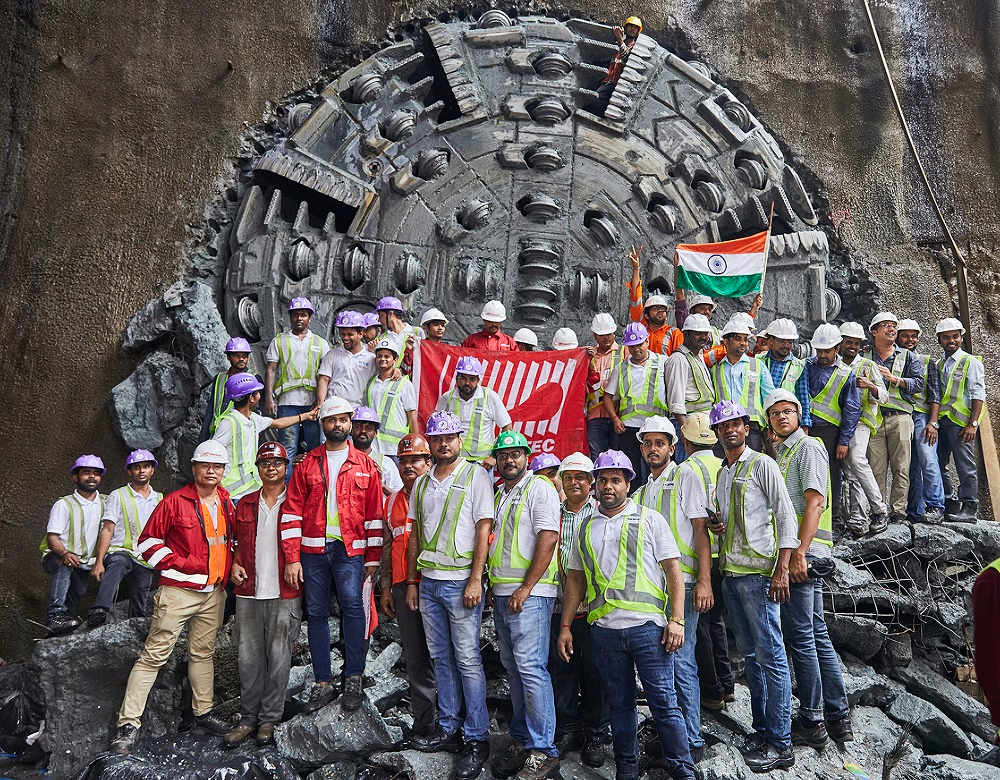 The major milestone saw HCC-MMS JV complete the 3.82-km southbound running tunnel between Chhatrapati Shivaji Terminal (CST) and Mumbai Central stations and become the first contractor on the project to finish an entire section of tunnel for one of the line’s seven contract packages.

With production rates of up to 24 m per day (holding the production record for the project), the TBM tunnel was driven via NATM station boxes at Kalbadevi, Girgaon and Grant Road, at an average depth of 20 m. It was successfully completed on schedule despite numerous geological and logistical challenges, including the tunnel’s proximity to the ocean, tunneling through reclaimed land, congested working areas and excavating beneath some of the oldest buildings in the city, many over a century old.

“With TERRATEC’s support, the HCC team completed this operation in a single drive, boring through geology consisting of basalt, breccia and tuff and reclaimed sand with negligible Settlement,” said Ravi Ranjan Kumar, MMRCL’s Chief Project Manager for UGC-02. “Most of the tunnel alignment is under the oldest and most densely populated area of south Mumbai with many dilapidated residential buildings. The performance of the TERRATEC dual-mode hard rock TBM in this geology was highly satisfactory and we now look forward to the similarly successful completion of TBM 02 ‘Vaitarna 2 ’ ”

The machine is one of two new TERRATEC dual-mode TBMs being used on contract UGC-02, which was awarded by MMRCL in July 2016. Five other TERRATEC TBMs are also achieving good progress on the new 33.5-km long underground corridor.

The versatile TERRATEC single shield TBMs are equipped to operate in either Open or Closed mode and have robust hard rock cutterheads that are mounted with heavy-duty 17-in. disc cutters, which are interchangeable with ripper tools, and feature large bucket openings that provide a 10% opening ratio.

Other state-of-the-art features include 2,000-kW Electric Variable Frequency Drives – that allow the cutterheads to cut efficiently in harder rock zones at maximum speeds of 7 rpm and deliver an exceptional torque of 8,500 kNm to cope with more fractured zones of ground along the alignment – as well as active shield articulation and built-in two component backfilling grout systems.

“TERRATEC supplied a robust, powerful, TBM for the recently completed southbound tunnel on UG-02,” said Hemant Sanghvi, Assistant General Manager for HCC. “The performance of the TBM, as well as the service and support provided by TERRATEC’s field operations team, has been very satisfactory. We look forward to TERRATEC’s continued co-operation and support for the duration of the second TBM drive.” 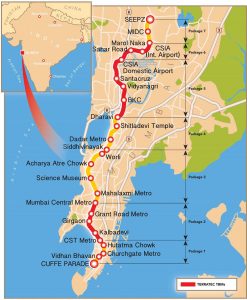 When complete, Mumbai Metro’s much-anticipated Line 3 will be the first underground metro line in the city. The 33.5-km long line will connect Cuffe Parade business district in the far south to the Santacruz Electronics Export Processing Zone (SEEPZ) in the north-central with 26 underground and one at-grade station (see map).

Construction of the line is divided into seven tunnel-and-station packages that were awarded to five contracting joint ventures in 2016. These five contractors have deployed a total of 17 TBMs with TERRATEC being the lead TBM supplier on the project with a 41% market share.

To date, the seven TERRATEC machines have completed 65% of the 22.6 km allocated to them – signifying almost half of the total 54 km of tunneling on the Line 3 project – and hold the production records for best day and best month on the project.

A video of the TERRATEC dual-mode TBM breaking through on UGC-02, in Mumbai, can be found here.