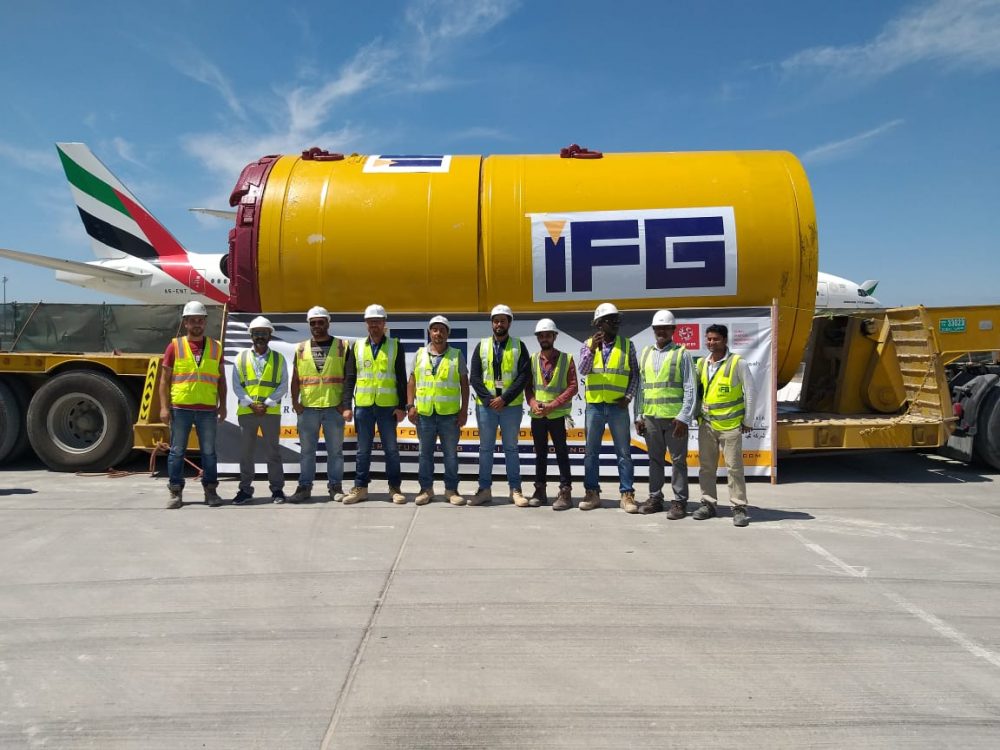 Dubai International Airport is the hub of air traffic in the Persian Gulf: nearly 90 million international passengers are handled here each year. The operators are constantly investing in capacity expansion. As part of Dubai International Airport Expansion Phase 3, and during ongoing flight operations, a Herrenknecht AVND2400AB MTBM safely and precisely excavated three new stormwater drainage tunnels – 610, 765 and 825 m long – under the taxiway.

The safe and precise crossing under airport taxiways and runways is one of the supreme disciplines of mechanized tunneling – especially when flight operations cannot be interrupted. Heave, settlement or other impairment of this highly sensitive infrastructure must be avoided at all costs. Herrenknecht tunnel boring machines in the hands of skillful tunnel builders are ideally equipped for this challenging task. The tunneling crew from International Foundation Group, working for Dubai Aviation Engineering Projects under the project management of M.A. Kharafi & Sons, relied on Herrenknecht tunneling technology to extend the stormwater drainage system at Dubai Airport. In March 2019, they celebrated the successful completion of the project.

Using the pipe jacking method, the AVND2400AB (3.025 m OD) mastered the challenge of the three long drives. The result is a new drainage tunnel with a total length of 2,200 m, which increases the airport’s drainage capacity. At depths of 13 to 15 m, the micromachine crossed under the Terminal 2 taxiways while flight operations on the ground and in the air continued smoothly and safely. On the longest drive, an average of 15 m of tunnel per day were excavated through soft soils with sandstone and siltstone. The drive remained exactly on course by precise process and control technology from VMT.

The new pipelines will efficiently collect and drain away rainwater, especially during heavy downpours, so it can no longer accumulate on the surface. This is crucial to maintaining smooth flight operations for one of the busiest airports in the world. 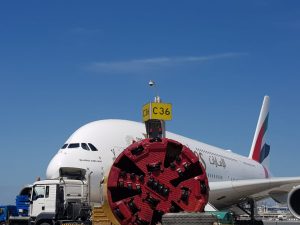 In the past, Herrenknecht technology has successfully completed a number of challenging tunnel missions, such as crossing under airports. For the extension of the baggage handling system at Zurich’s Kloten Airport, a Herrenknecht Mixshield (6.28 m OD) superbly excavated a 2,400-m long tunnel under the airport grounds until 2001. In 2002, an EPB Shield (6.46 m OD) tunneled under the Minneapolis-St. Paul Airport in the United States for the newly developed 18.6-km long light rail system. In Brazil, an AVN1500 constructed a 367-m long stormwater drainage tunnel under the runway at Goiânia Airport in 2015. In 2017, two EPB Shields (6.250 m OD) completed two new tunnel tubes for passenger and baggage transport with a total length of 3,842 m under the runways at Moscow Airport Sheremetyevo in Russia. During the excavation of a 4,500-m long metro tunnel in Barcelona, in 2018 a taxiway at El Prat Airport was crossed under over a distance of 70 m with great success.