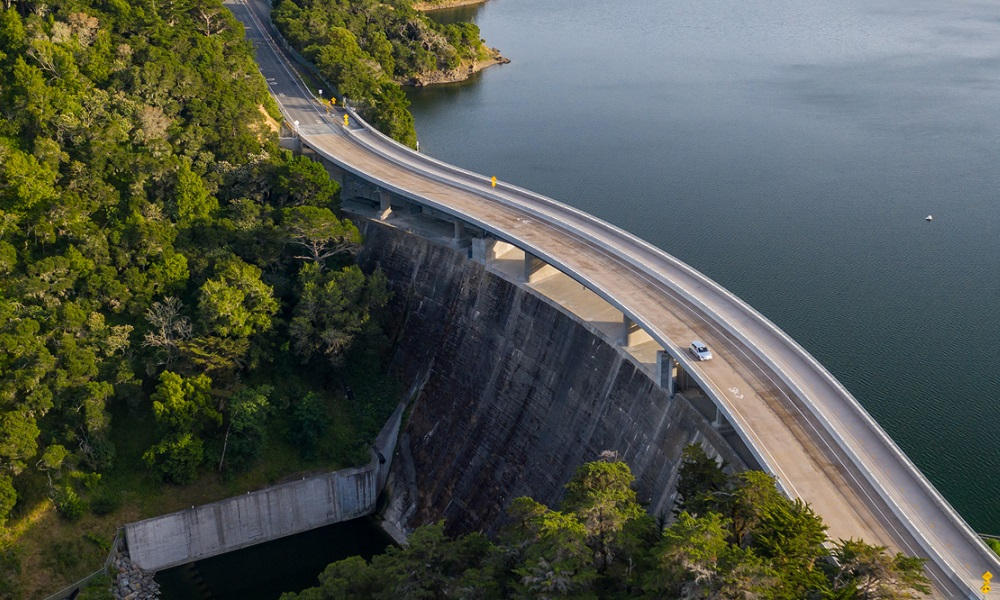 The project required a complete reconfiguration of a 1920s-era bridge, including raising the structure’s fortification wall by about 7 feet, along with its approaches, and the adjacent vista point overlook. The seven-span post-tensioned concrete box girder is 8 feet higher to allow for improvements to the dam below. Mechanical seismic isolation bearings were used to isolate the deck structure from the supporting bents and pier walls that are anchored to the dam crest.

The new route across the reservoir supports two lanes of traffic and provides pedestrians and cyclists with an Americans with Disabilities Act-compliant trail that features a beautiful view of the water and woods in the 23,000-acre watershed. Civil work included extensive grading surrounding the parking lot and bridge approaches, and drainage improvements.

WSP worked on the project in collaboration with AECOM on behalf of the client, the County of San Mateo Department of Public Works.

WSP served as the structural engineer of record for the 70-story 15 Hudson Yards, responsible for delivering the unique geometric structural design of the 918-foot-tall skyscraper, now one of the tallest residential buildings in New York City and the latest property to open its doors at Hudson Yards. The Culture Shed, an avant-garde performing arts center adjacent to 15 Hudson Yards, features a retractable roof that “docks” within the tower to create open public space when it is not in use.

WSP was part of the project team that applied accelerated bridge construction (ABC) techniques to expedite the replacement of the aging Eastbound Wilson Boulevard Bridge superstructure in Seven Corners, one of Northern Virginia’s busiest and most complicated intersections. Over a 54-hour weekend closure, the old bridge was demolished, and the new section put in place well in advance of the start of the following Monday morning rush hour, avoiding months-long lane closures that would have crippled traffic in the area.

The Joan & Edgar Booth Theatre Complex at Boston University is a new signature structure that unifies the theater arts program, providing a modern facility for learning and artistic collaboration. WSP served as the structural engineer, which was critical to the implementation of the design and open-concept black box theatre.

WSP served as the engineer of record for the Kosciuszko Bridge, Phase 2, the second span that carries Brooklyn-bound traffic and includes a single tower cable-stayed main span and 16 prestressed concrete girder approach spans. The firm has played multiple roles throughout the design and construction of the bridge for the New York State Department of Transportation.

The upgrade and expansion construction of the Patuxent Water Filtration Plant, Phase II in Laurel, Maryland was overseen by WSP, increasing the plant’s clean water capability from 56 million gallons per day (MGD) to 72 MGD, with a total emergency capacity of 110 MGD. The upgrades, including ultraviolet disinfection equipment, make Patuxent a self-sufficient facility.

WSP served as the engineer of record for the Fort McHenry Tunnel Lighting Replacement project in Baltimore, replacing the prior fluorescent lighting system with a modern light emitting diode (LED) system with dynamically adaptive dimming controls. The system uses lights that can withstand the harsh conditions of the tunnel’s corrosive environment.

The annual Engineering Excellence Awards is a national juried competition sponsored by the ACEC. As one of the 16 Grand Award winners, the Lower Crystal Springs Dam Bridge replacement was a finalist for the overall Grand Conceptor Award. Award criteria focuses on uniqueness and originality, technical innovation, social and economic value and generating excitement for the engineering profession.