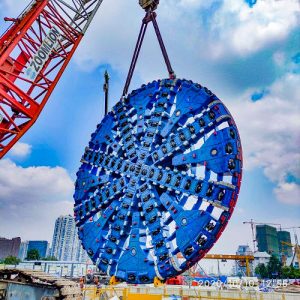 Hangzhou Huancheng North Road – Tianmushan Road (Zhonghe Interchange – Gucui Road) Upgrade Project Lot 2 starts from the No.2 working shaft on Baochu Road in the west and ends to the east of Zhonghe Interchange with a total length of about 3.26km, of which TBM drive is about 1.8km. There are various risk factors during TBM tunnelling, including the alignment passing by the metro line in operation, adjacent to crowded buildings, large diameter TBM tunneling through the upper-soft lower-hard stratum and silt stratum for a long distance, making ground settlement control challenging and critical.

The technical support team of the project is composed of TBM technology experts who relied on excellent skill and extensive experience in construction to solve the tunneling problems of tunneling in silt stratum and upper-soft lower-hard stratum, while maintaining a relatively rapid advance rate. The project has set a record for the construction of large diameter slurry TBM with maximum daily advance rate of 22m/day.

The entire project is expected to be completed before the 19th Asian Games Hangzhou 2022. By then, there will be no traffic lights for the nearly 40km distance from the west line of Hangzhou Ring Expressway to the Dajiangdong.