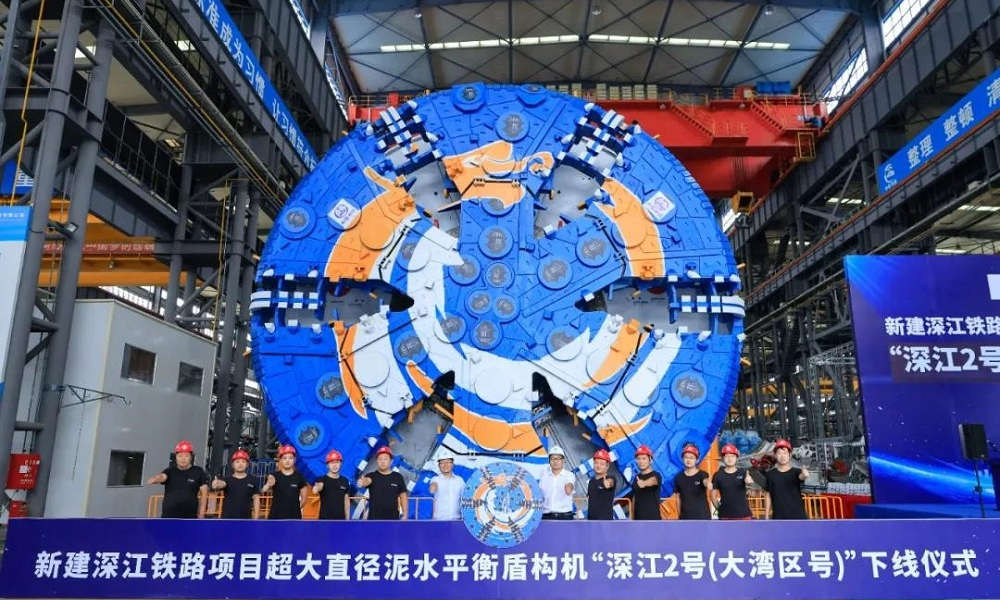 A large-diameter slurry TBM named “Dawanqu,” designed and manufactured by China Railway Engineering Equipment Group Co. Ltd. (CREG), is being assembled at the jobsite, gearing up for the construction of the new Shenzhen-Jiangmen Railway Pearl River Estuary Tunnel Project, a major transportation project in the China’s Guangdong-Hong Kong-Macao Greater Bay Area. The TBM rolled off the production line on Aug. 25, 2021, with an excavation diameter of 13.32 m, a total length of 133 m, and an overall design pressure of up to 12 bar.

Pearl River Estuary Tunnel is the underwater tunnel with the largest buried depth and highest water pressure in China with a total length of 13.69 km, a maximum buried depth of 115 m and a highest water pressure of 1.06 MPa. It is a single-tube, double-track high-speed railway tunnel with a design speed of 250 km/h, and once completed, it will be another world-class super project.

The tunnel will be bored under the Pearl River and the geology along the alignment is extremely complex, mainly including mixed ground composed of silt, sand and slightly weathered granite, as well as long-distance fault zones. The strength of the rock is up to 200 MPa. What’s worse, the corrosion of surrounding water is serious, which increases construction difficulty and safety risk.

According to the characteristics of the project, CREG designed and manufactured the large-diameter slurry TBM, which is equipped with an accessible cutterhead with a small cutter spacing for mixed ground, and other innovative technologies such as a telescopic main drive, automatic compensation of ultra-high pressure, four-circuit pressure regulating and air cushion direct exhaust excavation system.

It is reported that the main line of the Shenzhen-Jiangmen Railway has a total length of 116.12 km and is located in the center of the Guangdong-Hong Kong-Macao Greater Bay Area. It is an important part of the coastal corridor of China’s “Eight Vertical and Eight Horizontal” high-speed railway network. As a major transportation infrastructure, it serves the “Belt and Road” initiative and the Guangdong-Hong Kong-Macao Greater Bay Area and the Guangdong Free Trade Zone in China. The journey from the Pilot Free Trade Zone Qianhai & Shekou Area of Shenzhen to the Nansha Free Trade Zone in Guangzhou will take only about half an hour by high-speed railway after the completion of the Shenzhen-Jiangmen Railway.