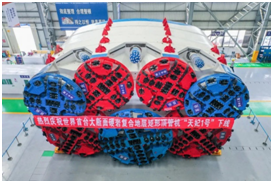 This pipe jacking machine will be used to excavate underground passages at Putian Railway Station, which is the first difficult project in China where multiple large cross-section rectangular pipe jacking machines pass through the railway in operation at the same time.

The excavation section of Tianfei No. 1 is 12.6 m wide and 7.65 m high. It adopts a seven-cutterhead combination arrangement with four cutterheads behind the leading three cutterheads. The cutting areas of adjacent cutterheads cross each other, and the cross-section excavation coverage rate reaches 100%. The machine has stronger rock breaking ability and tunneling efficiency that can excavate in high-strength hard rock stratum and 100MPa rock stratum. At the same time, it has very little disturbance to the ground, ensuring its safe crossing of the Hangzhou-Shenzhen railway. The rectangular pipe jacking machine will excavate a single tunnel of 260 m.