You are at:Home»News»Keville Elected as President of The Moles 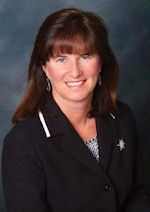 Christine Keville, President and CEO of Keville Enterprises Inc. based in Marshfield, Massachusetts, has been elected to serve as President of The Moles for the year 2019-2020. She assumed the role from retiring President, Kirk D. Junco, at the Annual Business Meeting and Dinner held on Wednesday, May 1, 2019, at Club 101 in New York City. The Moles are honored to have Keville as its first female president since its inception in 1937.

Keville earned a bachelor’s degree from North Adams State and a master’s in construction management from Northeastern University. As the founder of Keville Enterprises, she is responsible for the overall coordination, direction and supervision of the CM firm, which has nine offices across the country. Keville has extensive experience with the technical challenges involved in managing federal, state, municipal and privately funded contracts across the country.

Keville is actively engaged on a national level with the Construction Management Association of America’s (CMAA) efforts to promote quality management within the construction industry and served on the CMAA’s Board of Directors in various roles, including its first female National President and Foundation Chairman and currently as Chancellor of its College of Fellows. She is a Trustee of Wentworth Institute of Technology, who in 2015 honored her with its Woman of the Year Award; Chairman of the Civil and Environmental Engineering Industrial Advisory Board at Northeastern University; a licensed Construction Supervisor in Massachusetts; a member of the National Academy of Construction since 2015, and has served on the Board of Directors for Construction Industries of Massachusetts (CIM); Women’s Transportation Seminar (WTS-Boston), who recognized her in 2000 with its Woman of the Year Award, and the Jordan Hospital.

Also at The Moles Members Dinner, The Ralph Atwater Moles Service Award was presented to Moles Member Robert K. Radske, an Associate at Mueser Rutledge Consulting Engineers, in recognition of his many years of service, among them as serving as The Moles photographer, dedicating countless hours to photograph Moles events including the Annual Awards Dinners, Clambakes, Students Days, presentations to members and students and contributing to The Moles newsletter, Holing Through.