You are at:Home»News»International News»TBMs Millicent, Ursula Sail into London for Super Sewer 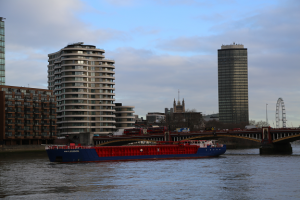 Tideway, the company building London’s “super sewer,” has welcomed the first shipment of two more tunnel boring machines (TBMs) in preparation for the start of tunneling later this year. The NFM TBMs, named Millicent and Ursula, were built in Le Creusot, France, and have travelled 500 miles to London via Hamburg, Germany.

Weighing in at more than 1300 tonnes each, Millicent and Ursula are the project’s largest TBMs. When fully assembled, they will be 8.8 m in diameter and more than 100 m long.

The TBMs were transported along the Thames, in line with Tideway’s commitment to transport over 90 percent of materials by river which will reduce the number of road vehicle journeys needed to build the tunnel.

To make the journey from France the machines had to be dismantled and will arrive in several parts over the coming weeks and be reassembled at Tideway’s Kirtling Street site in Battersea, close to Battersea Power Station.

Andy Mitchell, Tideway’s Chief Executive Officer, said: “The arrival of Tideway’s second and third TBMs is another exciting milestone, signaling that work is gearing up on London’s super sewer. This is going to be a big year for Tideway and we’re working hard to get tunnel shafts completed in preparation for the start of tunneling later this year. It is particularly fitting that we are delivering Millicent during the centenary of the right to vote for women in 1918.”

Millicent was named after Dame Millicent Fawcett, an English suffragist, intellectual and political leader, who is soon to be the first woman to be commemorated with a statue erected at Parliament Square.

Ursula was named after Audrey “Ursula” Smith, a British cryobiologist at King’s College Hospital in South London who discovered the use of glycerol to protect human red blood cells during freezing.