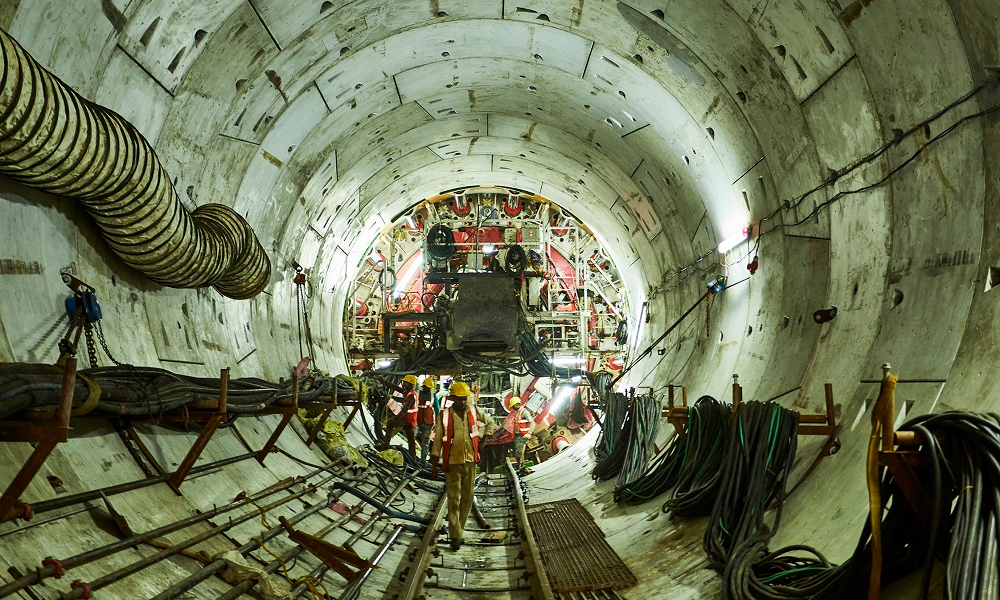 In early August, TERRATEC celebrated the assembly of its fifth new 6.68-m diameter dual-mode hard rock Tunnel Boring Machine (TBM) to go to work on Mumbai Metro’s Line 3 project in India, at the CSIA International Airport shaft on contract UGC-06. The first four of these machines are now fully up and running on two other contract packages (UGC-02 and UGC-05) and achieving production rates of up to 91 m per week, despite still being within the ‘learning curve’ period of their initial drives.

The versatile TERRATEC single shield TBMs are equipped to operate in either Open or Closed mode in the predominantly fresh and slightly to moderately weathered Basalt and Breccia that are anticipated on these contracts. The robust hard rock cutterheads are mounted with heavy-duty 17-in. disc cutters, which are interchangeable with ripper tools, and feature large bucket openings that provide a 10% opening ratio.

Other state-of-the-art features include 2,000-kW electric variable frequency drives that allow the cutterheads to cut efficiently in harder rock zones at maximum speeds of 7 rpm and deliver an exceptional torque of 8,000 kNm to cope with more fractured zones of ground along the alignment – as well as active shield articulation and built-in two component backfilling grout systems.

“Four of the seven TBMs are now in operation and they are achieving regular advance rates of 15 m per day on Package 2 and Package 5,” says TERRATEC Site Operations Manager, Bill Brundan. “The machines are performing very well, accomplishing combined production rates of over 40m per day, and the fifth and sixth TBMs are now being assembled. By the end of the year all seven machines – including two 6.61 m diameter mixed/rock Earth Pressure Balance Machines (EPBMs) – are expected to be mining simultaneously on all three contract Packages.”

Two of the 6.68-m diameter dual-mode hard rock TBMs (T58 and T59) are being used by the Hindustan Construction Company – Moscow Metrostroy JV to build the twin tunnels on the line’s 4.049-km UGC-02, which was awarded by the Mumbai Metro Rail Corporation Ltd (MMRCL) in July 2016. Both machines were deployed from the Chhatrapati Shivaji Terminal (CST) TBM launch shaft and are currently mining toward the Mumbai Central Station TBM receiving shaft. 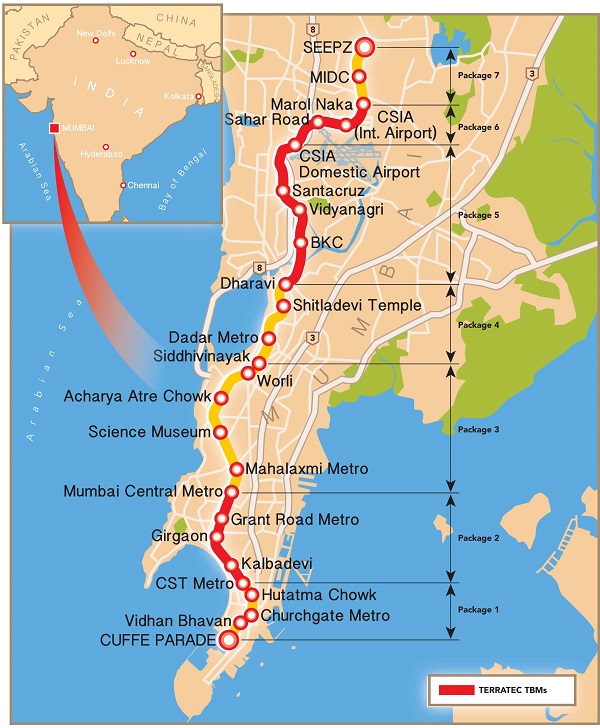 In addition to the hard rock TBMs, TERRATEC has supplied two re-manufactured 6.61-m diameter mixed/rock Earth Pressure Balance Machines (S63 and S64), which will also be deployed by the J. Kumar – China Railway No. 3 Engineering Group JV in Mumbai. These TBMs were recently used on Delhi Metro’s new Pink Line and have since undergone extensive refurbishment in order to fulfill a section of highly weathered ground on contract UGC-05.

“This is not the first time that we have selected TERRATEC as a project partner. We used four TERRATEC TBMs on our Delhi Metro contracts (CC20 & CC24), which allowed us to complete our tunneling operations on time and without any issues. We believe our goals of safe and timely tunneling will once again be achieved using TERRATEC technology and TBM performance,” said UGC-06’s Construction Manager, Urin Wanbanterng.

When complete, Mumbai Metro’s much-anticipated Line 3 will be the first underground metro line in the city. The 33.5-km long line will connect Cuffe Parade business district in the far south to the Santacruz Electronics Export Processing Zone (SEEPZ) in the north-central with 26 underground and one at-grade station.

Construction of the line is divided into seven tunnel-and-station packages that were awarded to five contracting joint ventures in 2016. These five contractors will deploy a total of 17 TBMs with TERRATEC being the lead TBM supplier on the project with a 41% market share.