You are at:Home»News»2019 Tunnel Achievement Award Presented at Breakthroughs in Tunneling Short Course 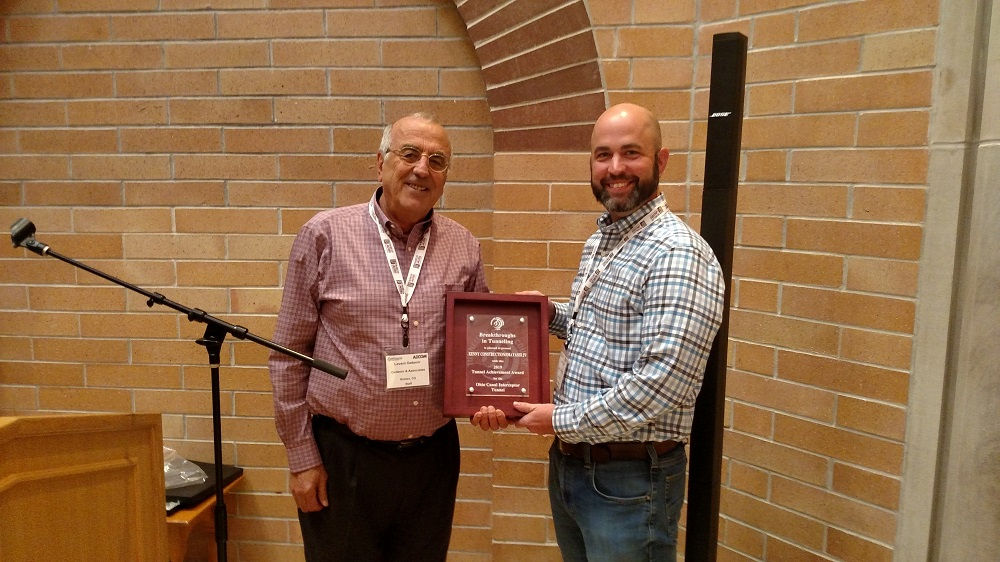 The 2019 Tunnel Achievement Award was presented to the Ohio Canal Interceptor Tunnel project on Tuesday, Sept. 10 as part of the 12th annual Breakthroughs in Tunneling Short Course at the University of Denver. David Chastka, project manager for contractor Kenny-Obayashi JV, accepted the award on behalf of the project team.

Established in 2012, the Tunnel Achievement Award recognizes projects that are successfully completed and demonstrate innovation and teamwork, and provide benefits to the community. The award is presented by the organizers of the Breakthroughs in Tunneling Short Course in conjunction with TBM: Tunnel Business Magazine.

“The Ohio Canal Interceptor Tunnel is being honored for its successful completion through challenging ground conditions while demonstrating new technology in the United States,” said Dr. Levent Ozdemir, course director for the Breakthroughs in Tunneling Short Course. “This project will help improve the water quality in the area, while contributing to the community by using local labor, subcontractors and suppliers.”

The Ohio Canal Interceptor Tunnel (OCIT) was built by the City of Akron (OH) as part of its $1.4 billion CSO-reduction program. The tunnel will store more than 25 million gallons of combined sewer flows and will prevent an estimated 450 million gallons of overflows from entering waterways annually.

The main component of the project is a 27-ft diameter, 6,240-ft long tunnel that begins at a portal adjacent to the Little Cuyahoga River and ends at a shaft downtown. The project was completed through soft-ground, mixed face and rock zones using a Robbins Crossover XRE TBM, the first use of the technology in the United States.